The Canadian M&A landscape is one of reserved optimism as 2022 comes to a close and we look ahead to a new year. Despite the uncertainty in the marketplace, Canada remains home to attractive assets and dynamic dealmakers. We expect M&A transactions in 2023 to see impressive activity in sectors such as technology and software, renewable and alternate sources of energy (particularly wind, solar, hydrogen and energy storage), battery metals in the mining sector, healthcare and agribusiness. Canada's mid-market remains resilient and we expect this to continue in 2023, albeit with a more cautious approach.

Trends in Canadian M&A transactions to watch for in early 2023 include:

All numbers are according to Bloomberg data (announced, completed or pending deals, excluding those that have been terminated or withdrawn) as of December 28, 2022, in U.S. dollars.

November was the busiest month this year in M&A volume at $52.5 billion. It was preceded and followed by the least active months⁠—with $7.6 billion in October and $8.3 billion in December.

REITs led the way in Canadian M&A volume by sector with $32.67 billion in deals. Banks were next, with some of the largest deals of 2022. When combined, the banking and diversified financial services sectors accounted for $44.23 billion in activity—one of the busiest years for M&A activity in the Canadian financial services sector in recent memory, with several high profile transactions.

Software was in fifth place, dominated by $13 billion in applications software and $5.7 billion in enterprise software. There was more volume in alternate sources of energy than in oil & gas—and taken together the sectors totaled $29.26 billion in deals. Mining saw over $11 billion in volume with the highest deal count in 2022. 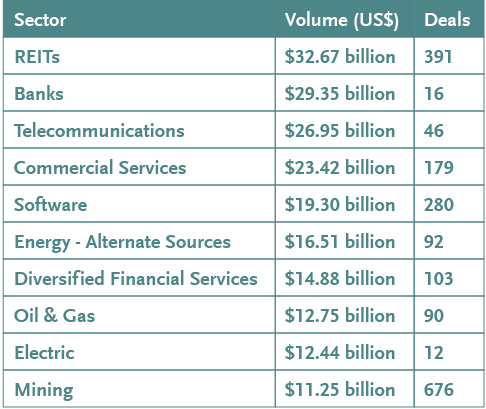 It was no surprise that Canadian M&A deal activity was down from 2021's record year. Companies and investors were faced with a unique set of challenges in rapid succession in 2022—inflation, rising interest rates, Russia's invasion of Ukraine, a lack of stability in commodity prices, squeezed or shifting supply chains, capacity issues and the possibility of a recession. Regulators in the United States and Canada also continued to tighten their review processes in 2022 and more readily used their enforcement powers, resulting in deal delays and increased conditionality. Despite these challenges, 2022 was still a strong year for M&A in Canada as compared to historical periods.

Although these pressures will remain in 2023, we expect that M&A activity will be positive with some impressive activity in certain sectors including technology and software, battery metals in the mining sector, healthcare and agribusiness. Given that energy transformation in Canada is at a relatively early stage, it is well situated to attract interest from investors in 2023, particularly focused on biofuels, hydrogen and carbon capture, utilization and storage.

Bennett Jones' Mergers & Acquisitions practice spans all industries—particularly those that drive the Canadian economy. To discuss the developments and opportunities shaping the Canadian M&A landscape, please contact the authors.