The Government of Canada introduced Bill C-48 in Parliament on May 12, 2017. The Bill passed second reading on October 4, 2017, and was then referred to the Standing Committee on Transport, Infrastructure and Communities. The Committee presented its report to the House at the end of November 2017.

If passed, the Act would prohibit oil tankers carrying over 12,500 metric tons of crude oil or persistent oil from stopping or unloading at ports or marine installations, and would prohibit any loading of more than 12,500 metric tons of crude or persistent oil onto ships along British Columbia’s north coast. The below map shows the boundaries of the Tanker Moratorium area.

The Lax Kw’alaams Indian Band filed this claim as a representative of the nine tribes of the Coast Tsimshian First Nation who collectively assert aboriginal title over an area including Nasoga Gulf, Grassy Point, Lax Kw’alaams and Tsimshian Peninsula north of 54°24'52.811" N latitude. This territory is within the proposed Tanker Moratorium boundaries.

The Lax Kw’alaams assert this area includes a deep-water corridor that would be suitable for the development of a marine terminal for the export of oil.

The Lax Kw’alaams also assert their aboriginal title includes "the right to choose what uses the land can be put, including use as a marine installation subject only to justifiable environmental assessment and approval legislation."

The Lax Kw’alaams claim the federal Tanker Moratorium discriminates against them by prohibiting their plans to develop oil export facility at Grassy Point (near Prince Rupert)—a location the Lax Kw’alaams say has “one of the best deep-water ports and safest waterways in Canada”—while permitting such development elsewhere in British Columbia and Canada.

Background on the Tanker Moratorium

Oil tankers have been travelling along the British Columbia coast since the 1930s. Transport Canada reports that, in 2015, there were about 197,513 departures and arrivals of vessels at British Columbia ports, with tankers accounting for about 1487—about 0.75 per cent.2

Oil is currently shipped mostly through the ports in Vancouver, Prince Rupert, and Kitimat, and most shipments are to and from communities along the coast. Barges, container ships, ferries, and other types of commercial and private vessels all carry oil.3

The federal government has, through policy and executive order, imposed a de facto moratorium on oil and gas exploration off the British Columbia coast since 1972.

In 1972, the federal government also announced a moratorium on crude oil tanker traffic through the Dixon Entrance, Hecate Strait, and Queen Charlotte Sound, but it never implemented the moratorium through legislative instrument. The legal status of the moratorium has been a source of debate and confusion ever since. In law and in practice, the federal government currently allows the export and import of crude oil from and to British Columbia ports, as well as intra-coastal shipments along the British Columbia coast.

In 1985, the federal government negotiated the Voluntary Tanker Exclusion Zone (TEZ) with the United States Coast Guard. The TEZ extends from the outer shores of British Columbia westward and was designed based on the worst possible drift of a disabled tanker with a cargo versus the time required for help to arrive. Loaded oil tankers travelling from Alaska to Washington must travel west of the zone.4 The attached map shows the TEZ boundaries.

As this legal challenge by the Lax Kw’alaams demonstrates, the Tanker Moratorium is controversial and engages many diverse community perspectives. It also illustrates the complexity in reconciling local, provincial, national and aboriginal interests on this issue.

Prime Minister Trudeau has stated previously, "No country would find 173 billion barrels of oil in the ground and just leave them there".5 While that statement demonstrates the federal government's commitment to developing Canada's oil resources, the Tanker Moratorium creates a substantial logistical hurdle for that development by limiting market access.

Bill C-48 defines a clear policy choice on where crude oil may be exported on the British Columbia coast—i.e., export only from the south coast. That choice has profound implications for the British Columbia, Alberta, and Canada economies, all of which depend heavily on the export trade. Restricting the options for export will add cost and complication to developing Canada's oil resources.

Two recent federal reviews of oil export proposals have concluded that the risks associated with exporting oil from Canada’s west coast are low, and can be managed to acceptable levels with appropriate mitigation measures. The Northern Gateway project review, in particular, included an assessment of oil shipments along a route through the proposed Tanker Moratorium area.

In spite of the profound implications of the Tanker Moratorium, the federal government’s analysis of the science and economics supporting its policy choice has not yet been well explained or debated. Nonetheless, Bill C-48 is in the final stages of being enacted. 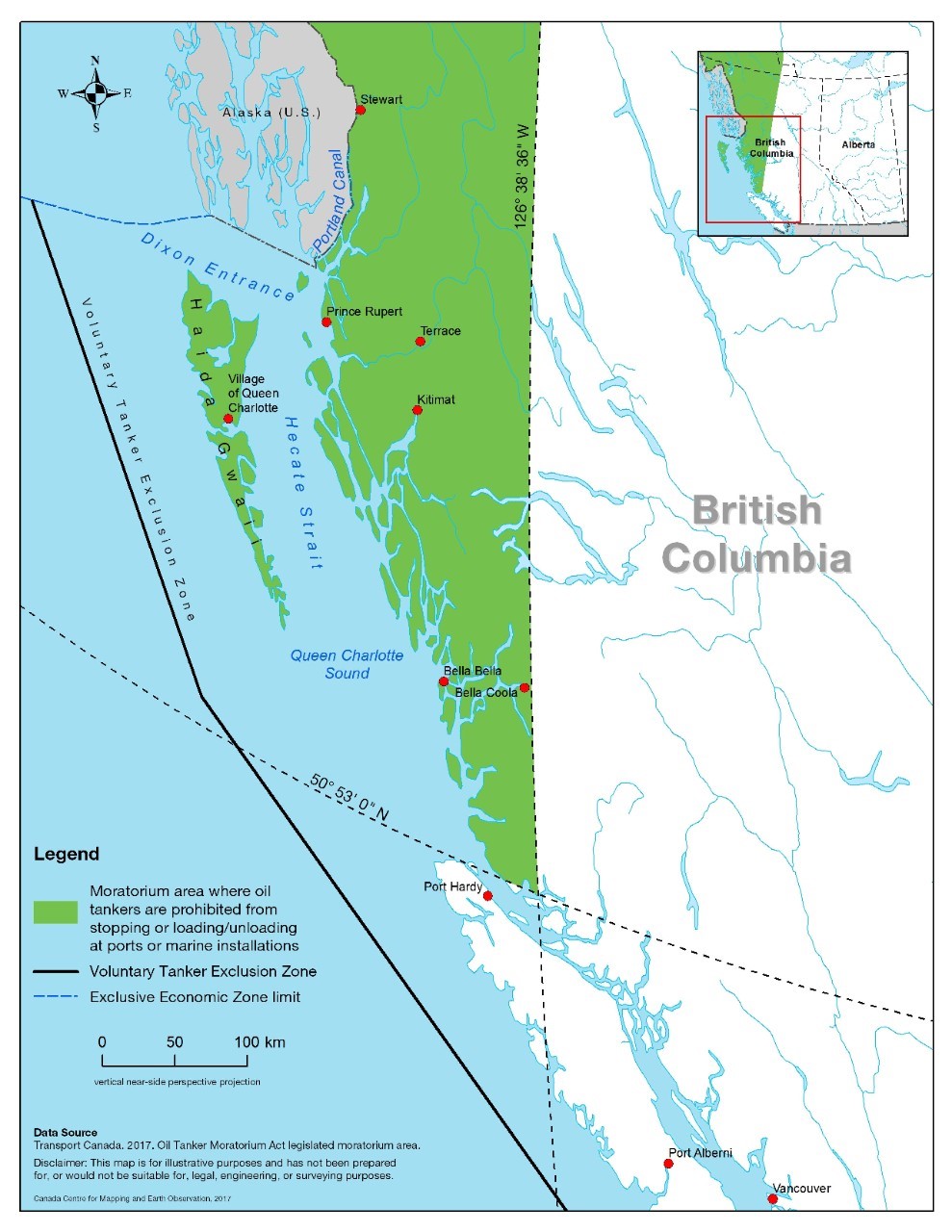