Various elements of the SGER are carried through into the CCIR, as the CCIR remains an emissions intensity-based regime requiring large emitters, and other facilities that have opted in, to reduce their emissions intensity below a prescribed level, or otherwise achieve this through a true-up obligation whereby credits can be applied against such required level, in concert with or as an alternative to physical abatement, with significant penalties for failure to achieve compliance.

However, the CCIR has fundamental differences both in the way a facility's total regulated emissions are calculated, as well as how the required emission intensity reduction is measured. The facility specific baselines that were the cornerstone of the SGER have now largely been replaced with product specific benchmarks which form the basis for an output based allocation of permissible CO2e emissions specific to each such product.

Who Does the CCIR Apply To?

The same as with the SGER it replaces, any facility that has emitted 100,000 tonnes of carbon dioxide equivalent (CO2e) in 2003 or any subsequent year will be subject to the CCIR. Like the SGER, certain facilities can opt-in to the CCIR and thereby avoid obligations they would otherwise have pursuant to Alberta's carbon levy (effectively exchanging the reporting and compliance obligations of the carbon levy for those of the CCIR which, depending on the circumstances, may be advantageous). Facilities that opted in under the SGER do not automatically qualify for inclusion under the CCIR.

A facility may opt-in under one of two circumstances. Firstly, if it is in direct competition with another facility that is subject to the CCIR and thus a "competitively impacted facility" or secondly, if it emits 50,000 tonnes or more of CO2e in its second full year of commercial operation and can demonstrate that it is in an "emissions-intensive trade-exposed sector". 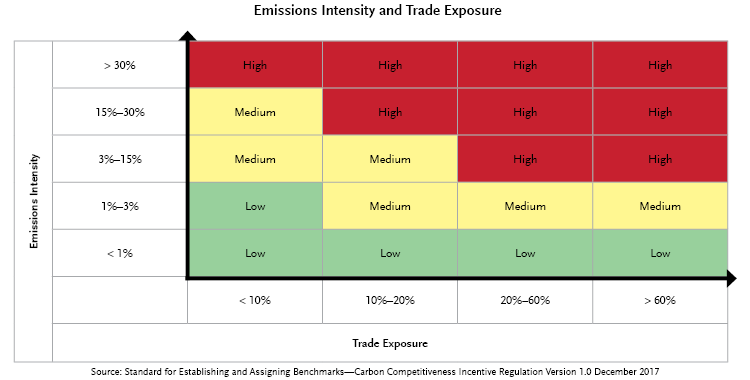 When emissions intensiveness and trade exposure combine to result in a "High" value, such facility is said to be in an EITE sector, and thus eligible to opt-in.

Notwithstanding the foregoing, facilities that are within the conventional oil and gas sector are currently not eligible to opt-in under the CCIR due to the fact that such facilities are exempt from paying Alberta's carbon levy on fuel used in a production process before 2023, pursuant to the Climate Leadership Regulation (Alberta). Facilities that generate electricity from renewable sources having a capacity less than five megawatts, or are otherwise subject to a renewable electricity support agreement (RESA), pursuant to the Alberta government's Renewable Electricity Program, are also ineligible to "opt-in" to the CCIR.

Provided certain criteria are met, a facility that has opted in to the CCIR, can apply to revoke such status, thereby returning it to carbon pricing regulation under Alberta's carbon levy.

How Does the CCIR Work?

Total Regulated Emissions are the sum of a facility's direct emissions of specified gases (excluding any biomass CO2 emissions) less any CO2 imported by such facility from a different facility to which the CCIR applies, plus any CO2 that is exported from such facility, plus any CO2 used by the facility as feedstock for urea production, as per the following formula:

Each facility will have an output based allocation of emissions calculated by multiplying the actual quantity of products produced by such facility by such product's benchmark which, depending on the product type, may be either an "established benchmark", or an "assigned benchmark" and then applying a scope adjustment to account for such facility's imports of electricity, heat or hydrogen (effectively deducting such imported quantities from such facility's output based allocation), as represented by the following formula: 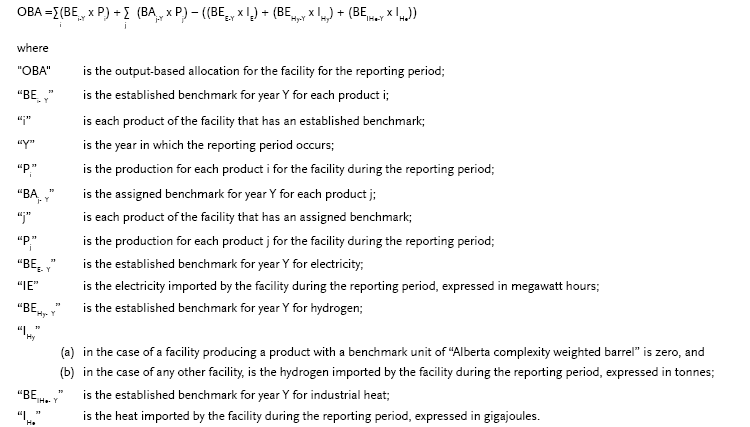 The CCIR contemplates two types of benchmarks. Those that are "established" and those that are "assigned". Generally, products produced by more than one regulated facility will have an established benchmark.

Below is a list of the current established benchmarks.

Assigned benchmarks differ from established benchmarks in that they are facility specific rather than product specific due to the fact that, with a few notable exceptions, they only apply to products that are produced at a single regulated facility. Currently, those products include linear alpha olefins, calcinated coke, iso-octane, carbon black, sub-bituminous coal, methanol, lime, magnesium oxide, nickel, cobalt, live cattle weight, and landfill gas methane. Assigned benchmarks are typically 80 percent of the production-weighted average of emissions for such facility (subject to stringency adjustments, if warranted).

Notwithstanding the foregoing, there are assigned benchmarks for products produced by more than a single regulated facility in the following instances:

The Alberta government indicated that for the Upgrading Natural Gas Processing and Multi-Product Chemicals product categories, insufficient data prevented the creation of an established benchmark, but that they intend to move these assigned benchmarks to established benchmarks as soon as possible. As for Natural Gas Transmission Networks and Other Fertilizer Products, due to difficulty in production metrics and small proportion of emissions, respectively, they are intended to continue to be subject to assigned benchmarks, irrespective of the fact that multiple regulated facilities produce such products.

For benchmarks both assigned and established, that employ production-weighted average methodology, the typical starting point of 80 percent of the production weighted average can be adjusted upwards (thereby reducing the stringency of the reduction requirement) in 10 percent increments up to 100 percent, provided that such facility can demonstrate either: (i) an economic impact analysis indicating that the CCIR compliance costs for such facility reveals operational vulnerability (based on ratios of compliance costs to a facility's sales or profit figures), provided such facility is also in an EITE sector, or (ii) that it deploys "best-in-class technology" or "best available technology that is economically achievable."

These reductions apply equally to regulated facilities in a "credit" position as well (i.e., where a facility's TRE is less than its OBA, entitling it to be issued emission performance credits) such that a facility entitled to receive emission performance credits in respect of the 2018 compliance year will receive 50 percent of such credits, and 25 percent of such credits for 2019.

Compliance options for regulated facilities under the CCIR are roughly analogous to those previously under the SGER, as a facility may physically abate its emissions or otherwise "true-up" its emission reduction requirements under the CCIR by applying emission offsets, emission performance credits or fund credits, or a combination of the foregoing. Like the SGER, there are no limits on applying fund credits purchased from the Alberta government, to satisfy such requirements, however, the CCIR now restricts how emission performance credits and emission offsets (collectively referred to as "credits") can be applied in respect of any such true-up obligation.

Limiting credit usage was expected, as the Alberta government announced on March 3, 2017, that credit usage would be capped at 30 percent of a facility's true-up obligation for the 2018 compliance year and onward. However, the CCIR, while relaxing the 30 percent cap by replacing it with a sliding scale of 50 percent up to 60 percent as detailed below now adds additional restrictions by placing an expiry date on credits and restricting credit usage based on the vintage of such credits.

Limits on Credit Usage—Old versus New

Credits under the CCIR are now broadly categorized into two groups: old (2016 vintage year or older) and new (2017 vintage year or later). Each compliance year now has specific caps on the percentage of credits that can form a facility's true-up obligation, with a further sub-cap on the percentage of old credits forming such true-up obligation in each compliance year, as illustrated by the following chart:

Under the CCIR, credits now have an expiry date relative to their vintage year such that credits from 2014 and earlier expire in 2020 and credits from 2015 and 2016 expire in 2021. New credits created in 2017 and onward are subject to an eight-year expiry such that 2017 credits expire in 2025. In each case, such credits can be used for the compliance year in which they expire.

For regulated facilities whose emissions exceed one megatonne of CO2e, they will be required to provide a forecast of the anticipated emissions for the following year by no later than November 30 of the preceding year save for those facilities that exceeded such threshold in 2017, which are required to submit such forecast no later than January 15, 2018. In addition, such facilities will also be required to submit compliance reports with associated compliance true-ups on a quarterly basis for so long as they remain above the one megatonne CO2e threshold.

For regulated facilities that do not exceed such threshold, annual submission of compliance reports by March 31 of the year immediately following the compliance year is all that is required.

Below are a few important dates to be mindful of:

Bennett Jones is ready to assist clients who wish to gain a better understanding of the CCIR, and the risks and opportunities it presents.

Accounting for Oil and Gas Revenues Without an Operating Agreement